“I Gave Her My All”: Father Shares Sad Screenshots after Finding out 6-Year-Old Daughter Isn’t His

A sad father, Daniel Robinson, has lamented bitterly over his recent findings about his six-year-old daughter. Daniel said he had been training his baby girl since she was born only to find out she isn’t his biological child. 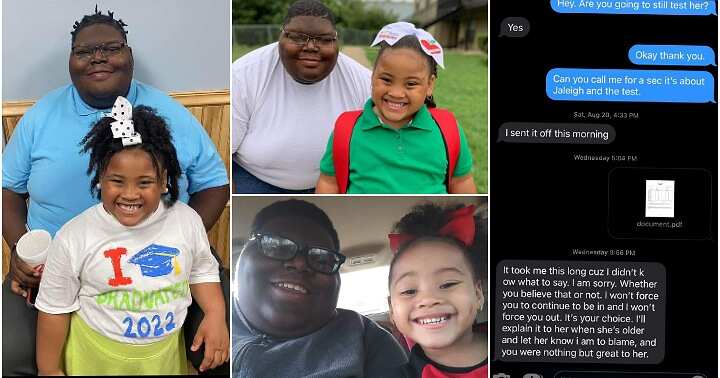 According to Daniel who became a single father for four years, he went as far as dropping out of school and getting into many debts just to take care of his daughter.

Sadly, six years after her birth, the child’s mother opened up to him that the child might not be his. They subsequently did a DNA test which confirmed that he was not the father.

Sharing screenshots of the test result and photos of his daughter, Daniel said:

“Tired. I’ve kept my peace as long as possible but I feel like it’s time to tell my story. I’ve loved this little girl while she was still a fetus inside of her mother. I dropped out of school to be a full time father. I worked whatever hours possible. I even became a SINGLE FATHER for 4 years!

“I’ve went into debt, I gave my absolute all, even scrapped change for wipes. Only to find out 6 years later that I had been being lied to and manipulated. She knew and half of her friends did too. I am hurt and angry. No I am NOT okay.”

Man finds out he’s not biological father of his son

Meanwhile, Legit.ng previously reported that a once happy union is about to crash after the husband made a shocking discovery.

The Nigerian man who is based in Turkey had tied the knot with his heartthrob who happens to be a medical doctor by profession. A social media user who narrated the story as shared by Instablog9ja on Instagram, revealed the man discovered after a DNA test that his second son doesn’t belong to him.

The husband would discover that the child belonged to a man who had sprayed his wife money on the occasion of their wedding. Broken by his discovery, the man is said to be seeking an end to the marriage via a divorce.