(L) Quincy Jones and daughter, Kidada Jones; (R) Kidada Jones with her then fiance’, Tupac
Kidada Jones, daughter of music icon, Quincy Jones, was the very last person to speak with her fiancé, Tupac, just moments before he died. In a very emotional recollection of what happened at the Las Vegas hospital, where ‘Pac died of gunshot wounds, the pain that clouded Kidada’s heart is evident.

Kidada Jones was in Vegas with Tupac on that horrific night of September 7, 1996, when ‘Pac was shot on a Las Vegas strip. The two were also living together in Calabasas, CA at the time of his murder. According to Vanity Fair, they’d planned on having a baby; and whenever ‘Pac was on the road he’d call Kidada nightly, ending their call with the words, “I’d take a bullet for you.” That’s how much he loved her. 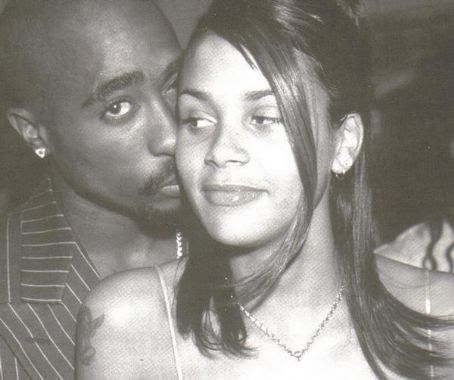 Tupac with his fiancée, Kidada Jones

‘Pac Was Tense In Las Vegas Hotel With Kidada

VF reported that the night ‘Pac was shot, he told Kidada he didn’t want to go to the Tyson fight, but he’d promised Suge Knight he would. However, he didn’t want her to be around the rowdy pack of people at the fight, so he told her to stay at the hotel instead.
In the hours leading up to the fight, Kidada says Tupac became more tense and when she asked him if he was planning on wearing his bulletproof vest he said, “No. It’ll be too hot.” Later that day she says their ride to Las Vegas was silent and ‘Pac seemed to have a lot on his mind. They made it to Vegas, she settled down in the Luxor Hotel, while he went to the Tyson fight at the MGM Grand. Hours later, ‘Pac came back heated:

Via Vanity Fair: “Some nig&a started a fight with me for nothin’,” [Tupac] told Kidada. “Something’s up. You stay here.” After a fast change into a basketball jersey and some baggy sweats, he was gone. 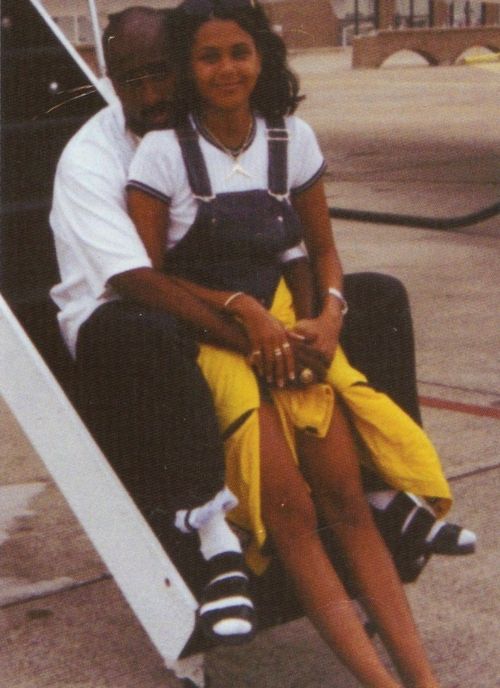 Kidada: When I got to the hospital they handed me a bag of bloody clothes and jewelry and told me, ‘He had no blood pressure when he came in. He’s had two blood transfusions and he is in the ICU hanging on by a string.’ I got a blanket from the hospital and circled the parking lot for nine hours. I said, “There’s no way he’s gonna die. There’s just no way. […] I walked around there ’til the sun came up….I was in complete shock.”-Via Q

What Happened Between Kidada & ‘Pac After He Regained Consciousness

Via Vanity Fair: [Tupac] regained consciousness once when Kidada was putting Don McLean’s “Vincent” into the CD player next to his bed. She heard a moan, and his eyes fluttered open. They were filled with mucus and swollen. “Tupac,” Kidada said, coming close, “do you hear me?” He seemed to nod. “If you can hear me,” she said, “move your feet.” The sheets rustled at the end of the bed. “Do you know I love you?” she said. “Do you know we all love you?” This time, the nod was distinct. As Kidada turned to the door, Tupac shook in convulsions. Then he slipped into a coma.

After ‘Pac’s Death “I Didn’t Want To Be Alive”

Via Q: Kidada said, “He and I lived together for four months and then he was murdered. […] It was the most horrible thing that ever happened to me. I knew we should’ve never gone to Vegas that night. I had a horrible feeling about it. I’ve gone over it in my mind a million times. It wasn’t supposed to happen. We weren’t supposed to be there. It was the worst possible thing that could’ve happened. [..] I never got to say goodbye. It’s not something that should happen to anyone. […] For a while afterward, I didn’t want to be alive. I was on my back, literally on my back, for months. My father [Quincy Jones] underestimated how that affected me and shaped and molded me as a human being.”

Six days after ‘Pac was shot, his beloved mother, Afeni Shakur, had no choice but to make the heart-wrenching decision to take him off life support on September 13, 1996. Rest on Tupac and Akeni Shakur…gone but never forgotten.