People frequently put celebrity couples on pedestals when they are long-lasting. But every relationship has its ups and downs, and often the ideal marriage is the one that takes a lot of effort and patience. That was unquestionably the case for Jada Pinkett and Will Smith. The usual love narrative that everyone anticipates is not how theirs unfolds. It’s an uncommon love story with a strong sense of individuality.
The way the world and attraction function is enigmatic. When Jada tried out for the role of his love interest in The Fresh Prince of Bel-Air, Will Smith got to know her. You might have assumed it was their destiny calling because that is how all love stories proceed. Jada was not given the part, though. Later, when Will watched her in the lead role in A Different World, he just had a “gut feeling” that the two of them would get along. He managed to arrange a meet and greet by making inquiries. As luck would have it, Jada and Will’s romance did not begin here. That’s as a result of Will falling madly in love with his wingman’s date. He did fall for the woman who was dating the man who was supposed to introduce him to Jada, that much is true. He then married Sheree Zampino, and the two of them had a son together.

Jada and Will kept running into each other a few years later. They ultimately had an opportunity to interact at a dinner gathering with friends; Will once referred to this as their “near-misses.” Both of their partners were unable to attend, so they were free to chat nonstop. Jada vehemently insisted, though, in a subsequent interview that they weren’t having an affair. 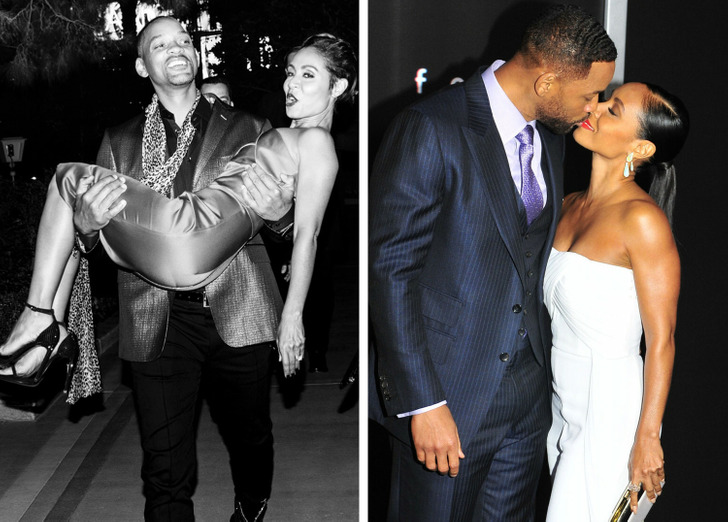 Following the dinner party, Will Smith was unable to stop thinking about Jada. He claimed that after realizing Sheree wasn’t the proper lady for him, he experienced an emotional collapse. He wasn’t prepared to cancel it, though. Sheree, on the other hand, soon after filed for divorce. Jada and Will Smith finally began dating. In an interview, they explained what transpired. Will claimed that he had questioned Jada, “Are you seeing anyone? My dumb a** was like, “OK! Cool, you’re seeing me now,” Jada added with a chuckle. ”

Will Smith and Jada tied the knot on December 31st, 1997. Jada redefined the phrase “gushing bride,” even if it wasn’t filled with joy in the way you might anticipate. The problem was that Jada had never wanted to get married. But she had only recently found out that she was expecting. Will was totally in favor of getting them married, as her mother was certain that they should.

I cried all night because I was pregnant and knew that my life would never be the same. “I never wanted to get married, and I didn’t want to be married. I also didn’t want to have a wedding. It was a horrible wedding. She said, “I walked sobbing down the freaking aisle. It was a catastrophe. I sobbed the entire time.

First kid of Jada and Will was born in the late 1990s. On July 8, 1998, their son, who they called Jaden Christopher Syre Smith, was born. On October 31, 2000, Willow Camille Reign Smith joined the family.

There was a report that the pair had an open marriage contract. This was initially refuted in Jada’s 2013 interview with Huff Post. Will and I are really laid-back with one another, so I believe that’s how people perceive us, added Jada. I’ve always told Will, though, “You can do whatever you want as long as you can look yourself in the mirror and be OK.” However, Will Smith said he and Jada have an open relationship in a GQ interview from 2021.

Jada confirmed the speculations that she was dating August Alsina in 2020. The affair happened 4.5 years ago, while the couple was divorcing.

Throughout their marriage, rumors were spreading. This was due to the fact that Will Smith and Jada sought to keep their romance private. People began speculating about the couple’s separation, which Will subsequently confirmed. We made the decision to go our separate ways for a while, he stated. “I’ll figure out how to make myself happy, and you go figure out how to make yourself happy,” she said.

Will continued by describing how he and Jada needed to improve because they were so young when they were married. “We came together young, and we were both broken in our ways, and to be allowed to make errors without the fear of losing your family is so crucial,” Will called this “therapizing.”

Fortunately, Jada and Will were able to endure difficult periods in their marriage. They claim that as a result, they have a greater sense of respect and unwavering love for one another.