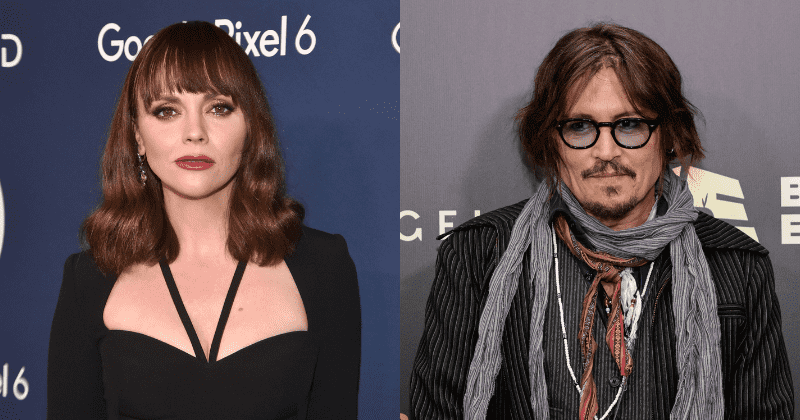 Christina Ricci revealed in a recent interview that it was none other than Johnny Depp who taught her what homosexuality means when she was a young girl. Ricci shared the funny anecdote while appearing on SiriusXM‘s Andy Cohen Live to talk about the current season of Showtime’s Yellowjackets and the upcoming Wednesday series on Netflix. According to the 42-year-old, the year was 1989 and she was a nine-year-old on her very first film set for the movie Mermaids with Winona Ryder, who was famously dating Depp at the time. “Johnny is actually the person who explained to me what homosexuality was when I was 9,” Ricci recalled during her recent interview, prompting Cohen to ask for the full backstory.

“There was something going on on set and someone was not being nice to someone else,” she explained. “And they were like, ‘Oh, well he might be homophobic.’ And then I was like, ‘Well, I don’t understand what that is.’ And, and I was in Winona’s [Ryder] trailer and she was like, ‘I don’t know how…’ so she put me on the phone with Johnny. And Johnny explained it to me.” According to Yahoo Entertainment, Depp and Ryder—one of the most iconic couples in pop culture—had just started dating when the actresses filmed Mermaids. They dated for four years after meeting at the premiere of Great Balls of Fire! before calling it quits in 1993, following a whirlwind engagement.

Recalling her impromptu lesson from Depp, Ricci remembered the star explaining things to her “very matter-of-factly.” She said: “Like the simplest terms… yeah. He was like, ‘It’s when a man wants to have sex with a man. And when a woman wants to have sex with a woman,’ and I was like, ‘Ah okay.’” Cohen then pointed out that Ricci could have also asked another Mermaids co-star to explain the concept to her. “I love it that Winona Ryder had to put you on the phone with Johnny Depp to get that story that she couldn’t spit it out in some way, or, I mean, you’ve got Cher in the next trailer,” the host joked.

“I know, we should’ve run right over there,” Ricci agreed. According to Marie Claire, Depp and Ryder were one of the most talked-about couples of the 90s before they parted ways. “It’s very hard to have a personal life in this town,” Depp said in a past interview, explaining how fame affected their private life. “My relationship with Winona, it was my mistake to be as open as we were, but I thought if we were honest it would destroy that curiosity monster. Instead, it fed it, gave people license to feel they were part of it.” Ryder has also spoken out about the split, saying in a 2009 interview: “I had just had my first real breakup, the first heartbreak. Everybody else just thought I had everything in the world but inside I was completely lost.”

watch the video below…

The famously private Stranger Things actress also addressed her highly-publicized relationship with Depp in a cover story for Harper’s BAZAAR‘s July 2022 digital issue. “That was my Girl, Interrupted real life,” Ryder said, referencing the 1999 film she starred in about a woman’s stay at a mental institution for troubled young women. “I remember, I was playing this character who ends up getting tortured in a Chilean prison [in the 1994 film The House of the Spirits]. I would look at these fake bruises and cuts on my face [from filming], and I would struggle to see myself as this little girl. ‘Would you be treating this girl like you’re treating yourself?’ I remember looking at myself and saying, ‘This is what I’m doing to myself inside.’ Because I just wasn’t taking care of myself.”